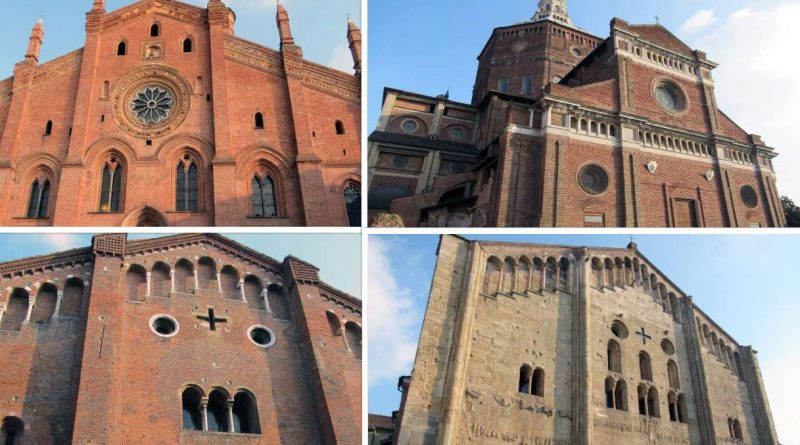 Pavia is one of the easiest day trip from Milan.

Today we will take you on a walking tour to visit 10 beautiful churches worth seeing in Pavia. Comfortable shoes, a bottle of water and off you go!

We start our tour from the Basilica of San Pietro in Ciel d’Oro. Those who reach Pavia by car will find a large parking area adjacent to the church.

The church is also easily reachable from the train station, just a 10-minute walk on foot.

The Basilica of San Pietro in Ciel d’Oro was consecrated in 1132 and is a masterpiece of Romanesque architecture.
Inside the last pillar of the right aisle, there is the tomb of the Lombard king Liutprand, whose bones were found in 1896.
The relics of St. Augustine of Ippo are also kept in the church, they were brought to Pavia by King Liutprand from Sardinia. The relics of the Saint are preserved in the famous Arc of Saint Augustine, whose marble carvings are visible on the main altar.

San Pietro in Ciel d’Oro does not have a bell tower because it was destroyed by the Napoleonic troops.

A beautiful church located behind the central building of the University of Pavia, founded in the thirteenth century.

The façade decorations immediately attract your attention as you arrive. Decorative effect is based on the contrast between red bricks and white sandstone.
The construction of this church took about 100 years and this justifies the significant gap in style between a Romanesque aps and a Gothic façade.

The interior of the church preserves very little of the fourteenth-century decoration as it was covered up by the eighteenthcentury restructurings and, later, it was completely lost due to the nineteenth and twentieth century modifications.

The facade was never finished, but it is sufficient to cross its threshold to realize the beauty of this Renaissance pearl. The dome was frescoed by Giovanni Battista Longone, the angular vaults and the pendentives by Moncalvo.

Church of Santa Maria di Canepanova is the most important sixteenth-century monument of Pavia and it was built to venerate the miraculous image of the Virgin that was frescoed on a wall of the house of Viscardo
Canepanova, from whom it took its name. The convent adjacent to the church is now occupied by the “Ugo Foscolo” Grammar School.

CHURCH OF THE SS. PRIMO AND FELICIANO

A church full of history is hidden down an alley. The church of Saints Primo and Feliciano is a Romanesque church with a typical red brick facade.

Its interior is rich of fifteenth-century frescoes, to be admired are the chapels with 17th-century decorations and mosaics on the floor.
Worth noting is the bell tower: it is the only one in Pavia that has preserved the sundial, in the place of the more traditional mechanical clock.

Church of the SS. First Feliciano – Via Ricciardino Langosco, 8

We come to one of Pavia’s most beautiful and fascinating churches.

The Basilica of San Michele Maggiore is located in the historic centre of the town, and it is considered the oldest religious monument in Pavia.
A masterpiece of Lombard Romanesque sandstone style, this church holds many traces of Pavia as the capital of the Italic kingdom. Many sumptuous celebrations and coronations of kings and emperors, including Barbarossa took place in this church.

Another little jewel hidden in the city centre. The church of San Teodoro was built in the period between 1185 and 1220.
The various capitals of different styles, decorated with leaves, animals and human heads, as well as the frescoes of Saint Agnes and Saint Theodor from the early 16th century are remarkable indeed.

On the back wall you can admire a fresco representation of Pavia during the VI century, with its 100 towers and the original covered bridge, reflecting the wealth of the past.

The soft light of the church encourages meditation, making it a good place place to get away from it all.
A curiosity: the building in front of the Basilica of San Teodoro is now an esclusive residence, but once it was a brothel.

We cross the typical streets of Pavia and we arrive in the beautiful Piazza Duomo, called Piazza Piccola (small) to distinguish it from Piazza Grande (large), now Piazza della Vittoria.

The civic tower once stood next to the facade, it was built in the eleventh century but collapsed on March 17, 1989, causing a number of deaths and injuries. Although there were
plans to rebuild it, none was ever completed.

After a time for shopping, we head towards the Church of Santa Maria del Carmine. It is one of the most beautiful examples of Lombard Gothic architecture.

The façade is characterized by a beautiful rose window that immediately jumps to the eye. Worth mentioning is the bell tower which is the highest in Pavia.

We are almost at the end of this day trip from Milan. At this point, a 1.5 km walk separates us from the penultimate stage of our “Via Crucis” in Pavia. You can choose to walk or, for the lazy ones, jump on a bus to reach the beautiful Church of San Salvatore (San Mauro).

MONASTERY OF THE “SANTISSIMO SALVATORE”

The church of San Salvatore, also called San Mauro, is part of a grandiose complex, including a church and a large monastery, founded in the Lombard period. It is one of the most significant monuments of the city not only for architecture, which marks the transition from Gothic to Renaissance, but also for the rich interior decoration.

One can admire beautiful frescoes of the depicting the life of Saint Martin of Tours at the entrance to the sacristy itself.
In conclusion, go and visit it, because it is not well known even in Pavia, but it deserves a visit.

Parish of the “Santissimo Salvatore” – Via Riviera, 20

After 1.5 km you reach the beautiful Church of San Lanfranco

The entire monastic complex is located near the Ticino river. It consists of a single-nave church with a Latin cross plan, a splendid fifteenth-century square cloister, a major cloister dating back to the end of the 15th century, a rustic area for agricultural use (now occupied by the Tennis Club) and a small cemetery.

On the right-hand wall you can admire the fresco depicting the assassination of Tomas Becket, archbishop of Canterbury, committed by five henchmen.